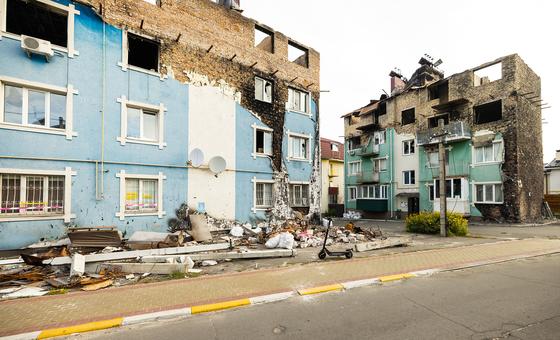 More than 73,000 people in Kharkiv oblast have now received food assistance, which is nearly half of the population in the retaken areas.

Villages and settlements across the oblast that are back under Ukrainian Government control are unable to meet even their most basic needs, according to the UN Office for the Coordination of Humanitarian Affairs (OCHA).

“Our access to these areas follows several months of intense fighting,” said OCHA spokesperson Jens Laerke. “Nearly 140,000 people are believed to remain in the towns, villages and settlement in areas where control has changed, but they have extremely limited access to food, water, gas, electricity and medical services.”

In the town of Izium, the 8,000 to 9,000 people still there are “completely dependent” on humanitarian aid to survive, Mr. Laerke continued.

Markets and shops have been destroyed or are closed, and families “gather in the main town square” to exchange possessions and supplies, to meet their basic needs, the OCHA spokesperson explained.

Further north and at the edge of Luhansk oblast, the town of Kupiansk is today home to 4,000 people, compared with the pre-war population of 28,000.

“Hostilities and fighting are still frequent there,” OCHA reported, adding that aid convoys have delivered food, water, essential household items, medicines and health services to Izium and Kupiansk, where volunteer groups have responded, too.

In addition to food assistance, OCHA has coordinated the distribution of 12,000 hygiene kits and kitchen sets, solar lamps and blankets to 15,000 people.

And also on Friday, the UN Human Rights Council voted to appoint a top rights investigator on Russia on Friday, although the vote was not unanimous.

Driven by concerns about the systematic oppression of rights defenders and journalists in Russia, several countries which supported the appointment of a Special Rapporteur also condemned the Russian invasion of Ukraine.

In response, Russia rejected the result of the vote – 17 in favour, six against and 24 abstentions – and dismissed it as a political gesture that was an attempt to punish the country for pursuing an independent agenda.

Human rights belong at the heart of...