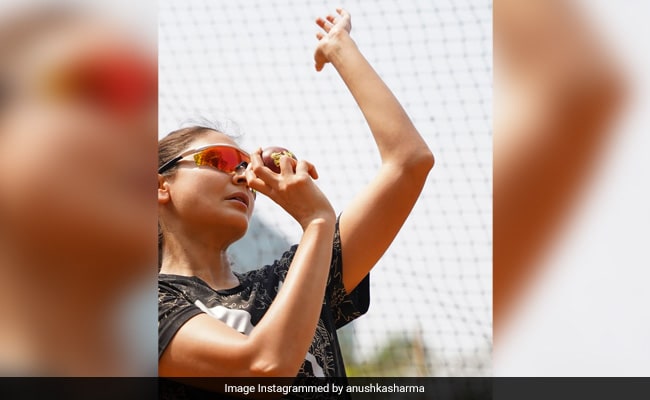 Anushka Sharma is here with a new update on Instagram. FYI: It’s not about her workout diaries. Well, this time, she has shared behind-the-scenes glimpses from the upcoming film Chakda Xpress. Excited, already? We won’t blame you. After all, who wouldn’t want to see the actress playing the role of Jhulan Goswami? The film, based on the former Indian captain’s life, stars Anushka in the lead role. We know Anushka’s flair in bringing characters to life on screen. And, we are sure she’ll do it again for this one. Preparations are underway in full swing. What’s cooking? Anushka is focussing on the craft of bowling. How do we know? She has shared two photos from her practice sessions.

The first image is a closeup of her hand as she learns to grip the cricket ball. In the second snapshot, we see Anushka Sharma in a black T-shirt and sunglasses. She is in action, this time. Caption? “Grip by grip,” it read. She has added the hashtags “prep” and “Chakda Xpress.” Anushka has received praises from her fans and more. Jhulan Goswami herself supported her efforts by dropping a comment that says, “Very nice.” The cricketer also added emojis showing thumbs up, claps and raised hands. Ankita Konwar also reacted with a “yass” and clapping hand emojis.

Earlier, Anushka Sharma had posted a teaser of sorts for Chakda Xpress. With the one-minute video, Anushka already blew our minds. Thanks to her performance and unique accent. She also grabbed attention with her thought-provoking caption that read, “It is a really special film because it is essentially a story of tremendous sacrifice. Chakda Xpress is inspired by the life and times of former Indian captain Jhulan Goswami and it will be an eye-opener into the world of women’s cricket.”

Anushka Sharma gave a shout out to Jhulan Goswami and the Indian women’s cricket team at large. The actress wrote, “As a woman, I was proud to hear Jhulan’s story and it is an honour for me to try and bring her life to audiences and cricket lovers. As a cricketing nation, we have to give our women cricketers their due. Jhulan’s story is truly an underdog story in the history of cricket in India and the film is our celebration of her spirit.”

The film’s teaser has received much attention and praise from Bollywood celebrities like Taapsee Pannu, who is playing the role of cricketer Mithali Raj in the film Shabaash Mithu, Deepika Padukone, Alia Bhatt and Ranveer Singh, among others.

Cult Of The Lamb Is Ready To Indoctrinate Console Players

Tamannaah Bhatia Is Recovering From Cannes In...