Top Posts
Novotel & HICC expect a strong rebound of...
Apple Watch Series 8: The Superlative Smartwatch
Hrithik Roshan’s Plus One At Richa Chadha And...
Overwatch 2 Review – A Heroic Return
How Edge Computing will Support the Metaverse
‘The Big Indian Holiday Boom’, ET TravelWorld News,...
Soha Ali Khan Offers A Glimpse Of Daughter...
Dorfromantik Review – Falling Into Place
UN chief: Countries bound for COP27 must make...
How ransomware gangs operate like legitimate businesses
Home » Bhagyshree And Husband Himalaya Dassani Exchange Jaimalas, “There Was No One At My Wedding,” She Recalls
Movies & TV

Bhagyshree And Husband Himalaya Dassani Exchange Jaimalas, “There Was No One At My Wedding,” She Recalls 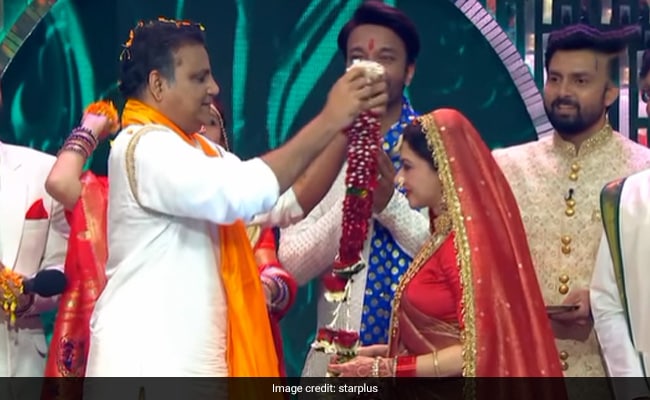 Bhagyashree and husband in a still from the video.(courtesy: starplus)

Bhagyashree and her husband Himalaya Dassani, who got married in 1990, renewed their wedding vows for an episode of the new TV show Smart Jodi. A clip from episode was shared on Star Plus’ official Instagram handle. In the video, Bhagyashree and her husband can be seen exchanging jaimalas. In the video, Bhagyashree recalled her wedding and said, “Mere liye shaadi mein koi nahi tha, sivaaye inke. Jab maine mummy papa se kaha ki main shaadi karna chahti hu inse, woh nahi maane. Maa baap ke baccho ke liye sapne hote hain lekin baccho ke apne sapne bhi hote hain aur kabhi kabhi, unke sapne unhe jeene dena chaiye. Kyuki aakhir mein, unki zindagi hai, unhe jini hai (There was no one at my wedding except him. When I told my parents that I wanted to marry him, they did not agree to it. Parents have dreams for their children but the children also have dreams of their own. And sometimes you should let them realise their dreams. At the end of the day, it’s their life that they need to live).”

The actress married Himalaya Dassani in a private ceremony, in the presence of her Maine Pyar Kiya co-star Salman Khan and the film’s director Sooraj Barjatya. The couple are parents to a son named Abhimanyu Dassani and a daughter named Avantika Dasani. The former made his Bollywood debut with the 2019 film Mard Ko Dard Nahi Hota. She added in the video, “Jo log and media kehte haina ki maine bhaag ke shaadi ki, usse bahut bahut gussa aata hai mujhe kyuki maine bhaag ke shadi nahi ki (When people and the media says that I ran away to get married, I feel so, so angry. Because I didn’t).”

Bhagyashree became a star after featuring in Sooraj Barjatya’s 1989 film Maine Pyar Kiya, opposite Salman Khan. She has also featured in TV shows such as Kachchi Dhoop, Kaagaz Ki Kashti and Laut Aao Trisha. She featured in the Kannada film Ammavra Ganda.

In terms of work, She was last seen in Kangana Ranaut’s Thalaivii. She will next be seen in a film with Prabhas.