Can You Identify These Cuties? Their Mom Is A Bachchan 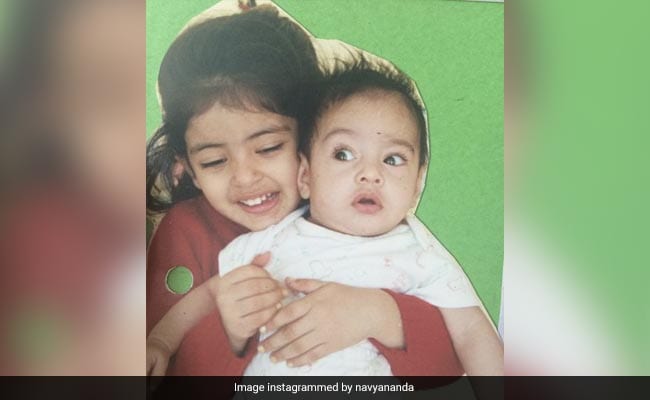 Navya Naveli Nanda has come up with a beautiful throwback picture to wish her brother Agastya Nanda. The pic is pure gold, to say the least. We can see little Navya cuddling baby Agastya. “Happy Rakhi to you,” Navya wrote in the caption box. She has also added an evil and red heart emoji. Their mother, Shweta Bachchan was among the first to drop a comment under the post. She called the sibling duo “puddings”. Navya’s friend, Suhana Khan found the picture “so cute”. Suhana and Agastya will make their Bollywood debut alongside Khushi Kapoor in The Archies, directed by Zoya Akhtar. Khushi’s aunt, Maheep Kapoor has left a number of red hearts on Navya’s Rakhi post.

Navya Naveli Nanda’s Raksha Bandhan post has also received a lot of love from her fans. They have flooded the feed with fire, red hearts and heart-eye emojis.

Navya Naveli Nanda shares a cute bond with her brother Agastya Nanda. To mark her little brother’s 21st birthday, Navya picked a beautiful childhood memory. Along with the picture, Navya wrote, “21 years of you bursting into my room, staring at me in silence and then leaving.”

Here is another adorable throwback picture of the Nanda family:

Navya Naveli Nanda, who is the granddaughter of Amitabh Bachchan and Jaya Bachchan, is the founder of Project Naveli and the co-owner of Aara Health. Despite being away from the glitz and glamour world, Navya manages to make headlines. Courtesy: Her travel diaries and food indulgence.

Deepika Padukone Reveals She Was Advised To...