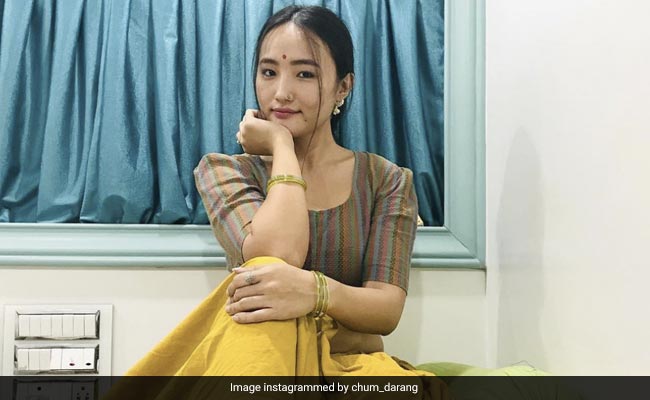 We are still dazed by the enigma of Sanjay Leela Bhansali’s Gangubai Kathiawadi. And, it may take us a while to come out of the dazzling splendour and charm of this movie. Well, we are not alone. The cast members of the biopic are also dipping into their albums to fetch out behind-the-scenes moments from the film sets. No, we aren’t talking about Alia Bhatt. This time, it’s Chum Darang. The 30-year-old simply can’t get over those shooting days spent with her co-actors. On Tuesday, she shared several photos and videos from the sets of the movie and wrote, “Gangubai Kathiawadi memories.” In some photos, we see her dressed in a saree or a long skirt, according to her role. Chum Darang has also shared a video of her makeup routine.

Chum Darang made her Bollywood debut in Rajkummar Rao and Bhumi Pednekar’sBadhaai Do, released on February 11. In the film, she played the role of Bhumi’s girlfriend.

Chum Darang had performed in some ads before her Bollywood debut. Here’s one of her ads where she was seen alongside Bollywood superstar Akshay Kumar:

Chum Darang has taken part in and won several beauty pageants, including Miss Tiara India- International in 2017. She was the 5th runner up at the Miss Asia World 2017 contest.

When talking about Gangubai Kathiawadi, there’s enough reason for Chum Darang to gush about the film. According to Bollywood trade analyst and critic Taran Adarsh, the Alia Bhatt starrer has collected almost ₹ 39.12 crores within three days of its theatrical release.

Young Souls Brawls Its Way To Consoles And PC This Month

A Pic Of Saif Ali Khan With...