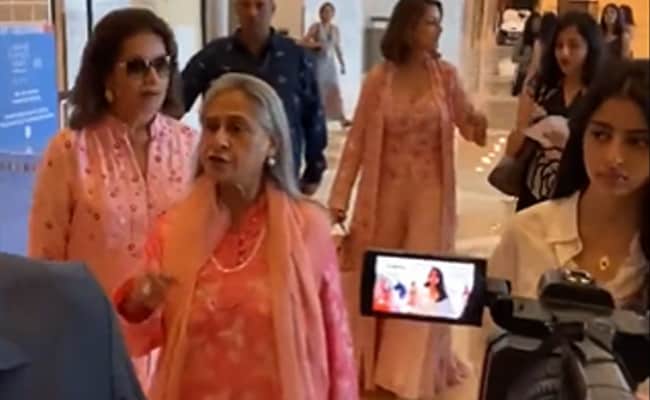 A still from the video. (courtesy: @Tushar_KN)

Jaya Bachchan, on Sunday, attended the Lakme Fashion Week in Mumbai with her granddaughter Navya Naveli Nanda, and once again, her encounter with the media is creating a heavy buzz on the Internet. In a viral video, the veteran actress can be seen walking inside the venue with Navya when a paparazzo stumbled while clicking their pictures. On seeing this, Jaya Bachchan says, “serves you right.” After a while, she added, “I hope you double up and fall.” Soon after the video was shared on Twitter, a user wrote, “What is she always angry about!” while another wrote, “She shouldn’t be give this much priority by media.”

Here have a look at the video:

This is what Bollywood Bhaands like Jaya Bachchan think of normal people. What kind of senseless person would wish for people to fall harder and get injured? pic.twitter.com/FH2xWClHNi

Well, this is not the first time Jaya Bachchan attended an event with her granddaughter Navya Naveli Nanda. A few days ago, they were spotted on a movie date. Jaya Bachchan is currently seen in Navya’s ongoing podcast, What the Hell Navya, alongside her daughter Shweta Bachchan.

Recently, Navya Nanda shared a picture on her Instagram featuring her mom Shweta Bachchan and grandmother Jaya Bachchan. In the image, they are happily posing for the camera. Check out the post below:

Navya Nanda is the daughter of Shweta Bachchan and Nikhil Nanda. They are also parents to a son Agastya Nanda.

On Amitabh Bachchan’s birthday, Jaya Bachchan, along with her family, including Abhishek Bachchan, surprised the megastar by celebrating his 80th birthday on the sets of Kaun Banega Crorepati.

Here have a look at the video:

What Not to Miss at Mini-Modernism Week