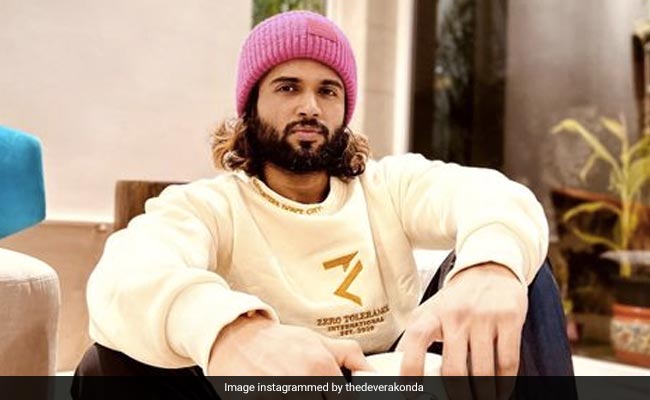 The latest episode of filmmaker Karan Johar’s popular show Koffee With Karan 7dropped today with Liger stars Vijay Deverakonda and Ananya Panday as guests. After Akshay Kumar and Samantha Ruth Prabhu’s no holds barred episode, Vijay and Ananya, too, attempted to “spill the beans” and the audience certainly received a glimmer of it. Besides his rumoured relationship with Rashmika Mandanna and the “cheesy” episode of Sara Ali Khan and Janhvi Kapoor, Vijay Deverakonda talked about being an outsider in the Telugu film industry, which, in any case, has families ruling the cinema for generations. Karan Johar asked him if it was a “hurdle” breaking into the industry and if it was “alienating” at some point.

Vijay said, “It’s definitely not easy breaking in when you’re like a stark outsider with absolutely no access to the industry at all. It makes it much harder. I don’t know if I would say that (alienating). Basically, my thoughts on this are: the world’s not fair. We’re not all born with the same financial status, with the same height, with the same looks, with the same abilities.”

He spoke about the “benefits” one has when born as a “star kid.” “I never blame or dislike someone for being born to a rich father where I was struggling to pay rent or to someone who was born in the industry. It’s not her fault or a star kid’s fault that they were born to parents who were acting. One day I’ll have a kid who is born into a family that acts. And it has nothing to do with him. The world’s never fair for anyone in any field. It’s always unequal. You just have to work your a** off to get to where you want to be. There are benefits to being born a star kid. But I would not change anything about my life. I think I’m very grateful for every insult, every hardship, every obstacle that I’ve faced in my life,” he said.

Ananya, on the other hand, who is actor Chunky Panday and Bhavana Panday’s daughter, addressed trolls and “nasty” comments about her “privilege.” She said, “Of course, it takes a toll on me. I can’t sit here and pretend I’m happy or I’m very strong and I can deal with everything because I think as a 19-year-old when you’re constantly told that you’re ugly or you’re flat-chested or you look a certain way and insult my parents and my sister it gets a little scary and sad sometimes because I’m like what did I do so wrong. I try to be a kind, nice person. I work very hard. I love acting. As far as I can remember, I want to be an actor. So sometimes I’m just a girl trying to do my job. I don’t know what I did so wrong to hurt or offend people. but then I also can understand where people are coming from and it’s okay.”

She added that her father has been insulted by trolls but she focuses on work and entertaining people. “My dad, for example, at home growing up, he did have his fair share of failures. As kids, my younger sister Rysa and I have seen that as well. That’s taken a toll on us in general. There was this joke that people said ‘you’re calling her a star kid her dad was never even a star.’ So things like that affect me especially when it’s about my family. Because I’m obsessed with my family. it does hurt. I don’t want to not own where I come from as well. I’m very happy with the upbringing I’ve had. I’m the person I am because of my parents. I’m here to work and entertain people. If you’re laughing with me, at me…”

During the rapid-fire round, Vijay was asked about how he is able to push the boundaries in his career and what “floats his boat” as an actor. Citing examples of Shah Rukh Khan and Chiranjeevi, who started from scratch in the film industry, he said, “I do it for myself. I love acting. I love with money that comes with it, the comfort, the luxury, what I can provide for my family. But I also feel there is a bigger purpose for what’s happened to me in my life. Six out of my 10 friends were people who couldn’t go on school trips because you didn’t know if you could pay the fee or you couldn’t go to movies with your friends because rent is important.”

However, one must not stop dreaming big, said Vijay. “But you have dreams, big dreams. You want to make it but you don’t know if it’s okay to make it. And your own family will tell you don’t dream so big. And it’s important like if they see that I came from there and did it then anyone in this country can. When I was growing up I saw Shah Rukh Khan coming from Delhi or Chiranjeevi garu back home coming from nothing – gave you this glimmer of hope that it can be done. I think I need to do the same for my generation and the people who come after me because it does help and it does show you a way. I feel that’s what floats my boat or pushes me,” he shared.

Bentley Partners with Naim and Steve Mazzaro for an Extraordinary Journey

A Scene From Akshay Kumar And Kapil...