No One Can Beat Madhuri Dixit’s Eye Roll. See The Video 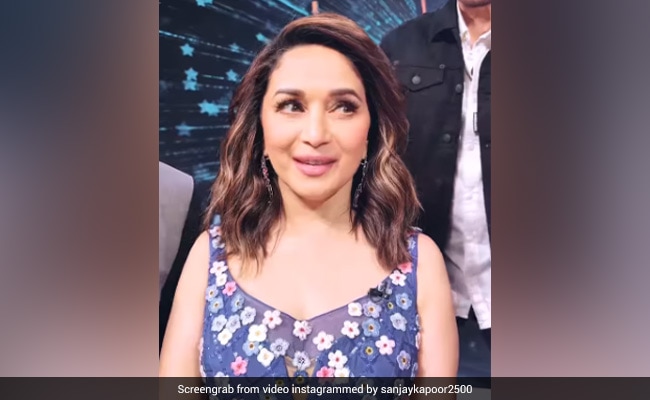 Madhuri Dixit in a still from the video. (courtesy: sanjaykapoor2500)

Sanjay Kapoor and Madhuri Dixit’s 90’s popular song Akhiyaan Milaoon Kabhi is creating quite a buzz. Thanks to the two celebrities for recreating moments from the popular number during the promotion of their Netflix series The Fame Game. The song was a part of their 1995 film Raja. And, now, Sanjay Kapoor has shared a video featuring himself and Madhuri Dixit. Here, we see the diva rolling her eyeballs. And, how. As the camera pans out, we see that Madhuri Dixit is surrounded by Sanjay Kapoor, Badshah, Manav Kaul and Arjun Bijlani. Here’s what Sanjay Kapoor wrote, “The Fame Game journey continues. What a fantastic evening.” It seems that the clip was recorded on the sets of India’s Got Talent.

Recently, this song made the headlines when Sanjay Kapoor and Madhuri matched steps on the stage of the reality show Hunarbaaz. After their performance, Mithun Chakraborty commented on Sanjay Kapoor’s dance moves and made us ROFL. The veteran actor said, “Matlab kya impression. Shatabdi ka sabse, sabse… baki ka tu samajh ja [I mean, what an impression. This was the century’s most, most… the rest I leave it to your understanding].” Sanjay Kapoor posted the clip from the show and wrote, “When Mithun da lied through his teeth and put me on channe ka khet hahaha and I love him for this.”

Madhuri Dixit and Sanjay Kapoor grooved to the beats of the hit number at a party. Sanjay Kapoor posted a video from the gala night. His caption had a tinge of nostalgia. He wrote, “Back to the 90s. What a night.” The party also included Genelia D’Souza, Ritesh Deshmukh and Farah Khan.

Madhuri Dixit and Sanjay Kapoor’s The Fame Game was released on February 25. The series includes Manav Kaul, Rajashri Deshpande and Muskkaan Jafferi in its cast.

Feel The Magic Of Love With Ranbir...