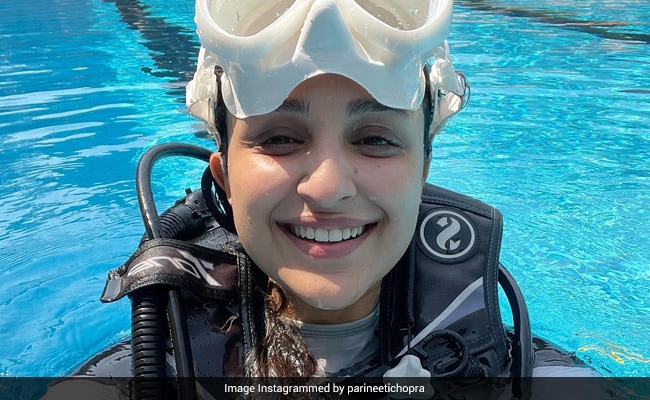 Parineeti Chopra is a water baby and there is no doubt about it. Her social media posts often feature her love for scuba diving. She loves to indulge in it whenever she gets a chance. Here’s another such post in which Parineeti professes her love for “ocean dunking”. The actress shared a photo where she is dressed up in a black-and-white scuba diving outfit. Resting her goggles on her forehead, Parineeti gave us her sparkling smile. What did she say? “9 years of wearing the kit and ocean dunking. Something cool coming up,” read her caption. She added the hashtag “scuba diving”.

A couple of months ago, where Parineeti Chopra stunned us with one of her scuba diving experiences. She shared videos and photos from the underwater adventure. The post also had a photo where Parineeti was seen resting on the beach in diving gear. She captioned the post, “The place where I belong,” and added hashtags “Home”, “Diver” and “Ocean”

Last year, on one occasion, Parineeti Chopra told her Instafam how much she missed the ocean. She had shared a throwback photo from the Maldives and wrote, “God, I miss the ocean (yes, I’m aware it’s only been a month).” In the photo, Parineeti is seen sitting by the ocean in a yellow swimsuit.

For Parineeti Chopra, scuba diving is equal to meditation. We aren’t saying it. The actress herself revealed it in another Instagram post. While enjoying her time in the Maldives, Parineeti posted an underwater video, where she’s seen swimming with stingrays. She captioned the post, “Meditation”.

Before Parineeti Chopra set herself on a scuba diving frenzy last year with her brother, Shivang Chopra, she had left a note for her fans. She wrote, “The next seven days, Shivang  and I are going to live on a boat; doing what we love the most — scuba diving. There are 14 other shark chasers here. The phone network is really weak, but I’ll try taking you on the ride with me. Wish us luck.”

Parineeti Chopra was last seen in the movie Saina, a biopic on badminton player Saina Nehwal. She will be next seen in Sooraj Barjatya’s directorial venture, Uunchai, and Animal.

How to Disable Caps Lock in Windows...