A rare holographic “Illustrator” Pikachu Pokémon card first released in 1998 has been sold for a record-breaking $900,000.

This news comes by way of Kotaku, which first reported that auction site Goldin announced it’d be auctioning off the rare card. The owner of this now-$900,000 card remains unknown at the time of this writing, but the final auction price blows past previous records for a single Pokémon card. 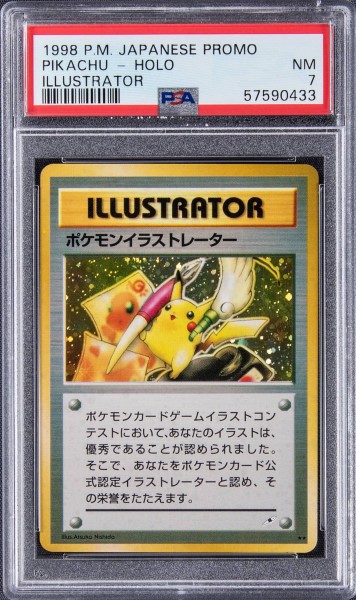 That previous record was $375,000 and it was the selling price for a “Near Mint 7” version of Illustrator Pikachu sold in February of last year. This new one also carried with it a “Near Mint 7” condition, and it was sold on February 23. Kotaku reports that it was one of only 39 copies of this card currently known to exist in the world, according to card condition grading firm PSA.

“The Illustrator Pikachu is extremely rare and only released in Japan,” PSA writes on Twitter. “According to Zenplus, there were only 39 produced. They were awarded as prizes for the ‘Pokemon Card Game Illustration Contest,’ sponsored by Corocoro Comic in 1998. The artwork for the card was illustrated by Atsuko Nishida. She is credited as one of the creators of Pikachu.

It has the layout of a trainer card with the word ‘Illustrator’ where you would typically find ‘Trainer.’ The main image has Pikachu holding a paintbrush and a drawing of Charmander over a holographic background. According to Bulbapedia, the card text is translated to, ‘We certify that your illustration is an excellent entry in the Pokemon Card Game Illustration Contest. Therefore, we state that you are an Officially Authorized Pokemon Card Illustrator and admire your skill.'”

The offers began under $100,000 when this card first went live in Goldin’s auction but as is expected in auctions, bidders continued to drive the price up in attempts to secure the item and that’s how it reached such a jaw-dropping number (although looking at previous card prices, $900,000 is still absurd). Now, this Illustrator Pikachu Pokémon card holds the all-time record for any Pokémon card sold ever.

It’s surprising, but not entirely unexpected considering the Pokémon card market as of late. Finding new releases on shelves is hard enough, especially now that many stores don’t even put them on shelves due to the amount of violence that would ensue around new drops. Moreover, buying them online became just as hard. Nowadays, buying Pokémon cards can be as difficult as securing a new PlayStation 5 in some cases. Most people aren’t out here spending nearly $1 million on a single card, though.

For more about Pokémon cards, head to Game Informer’s Pokémon Trading Card Game hub where we have tons of stories about rare cards, new drops, and more. Check out this unboxing of the coolest cards in the Pokémon Celebrations series after that.

What’s the rarest Pokémon card you own? Let us know in the comments below!

Weekend Warrior – Fond Farewells On A...