Siddhant Chaturvedi Took Akshay Kumar’s Viral “Bewafa Challenge.” So, How Did He Do? 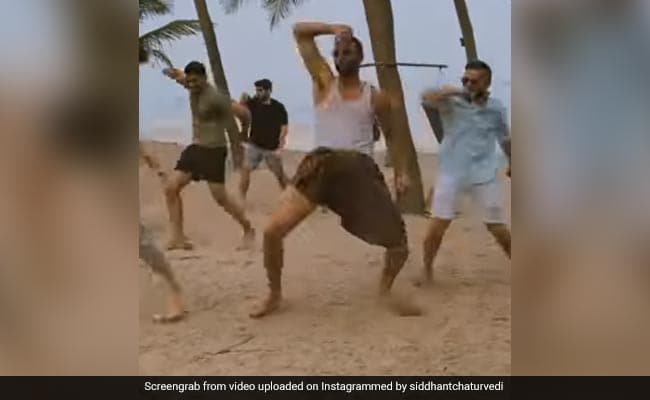 Siddhant Chaturvedi in a still from the video. (courtesy: siddhantchaturvedi)

Siddhant Chaturvedi shared a video of himself dancing to the track Bewafa from Akshay Kumar’s upcoming film Bachchhan Paandey. For the uninitiated, as a part of the “Bewafa Challenge,” one is supposed to make an Instagram Reel dancing on the aforementioned song. The actor can be seen dancing his heart out on the beach. He captioned the post: “Yudhra ke set pe Saare boley Bewafa! Akshay Kumar paaji.” In the comments section, Malavika Mohanan wrote: “Yudi in lungii! Areh areh.” We think Siddhant Chaturvedi did a fairly good job at the challenge.

Check out the video posted by Siddhant Chaturvedi here:

On Thursday, Akshay Kumar shared a video, in which he could be seen dancing with co-stars Kriti Sanon, Arshad Warsi and Jacqueline Fernandez. He captioned the video, “Saare Bolo Bewafa. Are you tripping on this song too?”

Siddhant Chaturvedi stepped into the Indian entertainment industry with the 2016 web-series Inside Edge. He also featured in the web-series Life Sahi Hai. He became a stra after playing the role of MC Sher in Zoya Akhtar’s Gully Boy, starring Ranveer Singh in the lead role.

The Batman, Gotham Knights, And Nearly A Dozen Books Your Should Read | From Panel To Podcast

“Husband’s Away, Stole His Blazer”

How to Automatically Shut Down a Windows...