Twinkle Khanna Gives Glimpses Of “Two Most Important Women” In Her Life. Any Guesses? 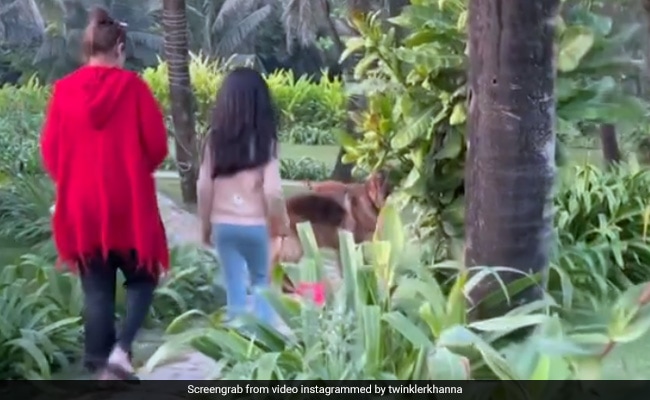 Earlier today, Twinkle Khanna gave glimpses of the two most important women in her life. Well, they are Dimple Kapadia (her mother) and Nitara (her daughter). In the video, Dimple Kapadia is seen walking in a park with granddaughter Nitara while chatting. The caption of Twinkle Khanna’s video reads “The two most important women in my life are walking together with an ease that I envy:) With grandmothers and granddaughters, the generational gap is wide enough so that both can stretch out their arms without smacking the other in the face. Nanis are simply the best though, aren’t they?” Namrata Shirodkar left an array of love-struck emojis in the comment section.

Twinkle Khanna got married to actor Akshay Kumar in January 2001 and together they have a son, Aarav Bhatia, and a daughter, Nitara. Twinkle often shares photos and videos of Nitara and Aarav. Once, she shared a photo of goofy Nitara, in which, she was dressed for the first day of her virtual school.

Twinkle had captioned the photo as “Dressing up for the first day of virtual school. She makes her sartorial point clear. Also wearing three pairs of tights and two jackets like all Bombay crackpots who are pretending we actually experience any season besides hot and damp or warm and wet.”

On the work front, Twinkle Khanna has authored books including Mrs. Funnybones, The Legend of Lakshmi Prasad and Pyjamas Are Forgiving. Her last Bollywood film Love Ke Liye Kuch Bhi Karega released in 2001.

How the conflict is disrupting air travel

How to Add Desktop Wallpaper and Screensaver...

Deepika Padukone Is A Sight To Behold...

Bhumi Pednekar Celebrates 7 Years Of Her...