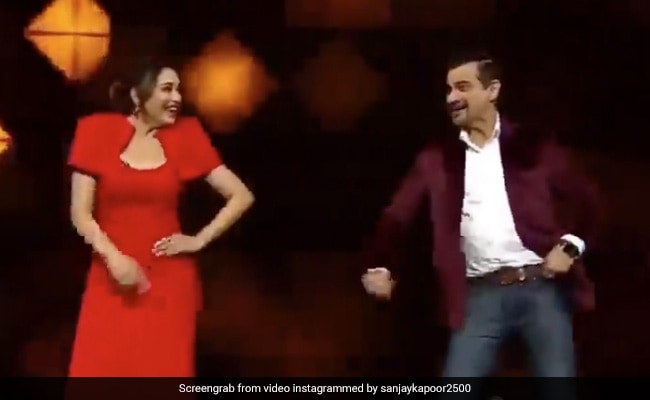 Sanjay Kapoor is on a roll. We are awed by his performance in the series The Fame Game where he features alongside Madhuri Dixit. Well, now, Sanjay Kapoor has stolen the spotlight with his appearance on the reality show Hunarbaaz. How? In a video shared on Instagram, Sanjay Kapoor is matching steps with Madhuri Dixit on the stage. The two are grooving to the hit number Akhiyaan Milaoon Kabhi, from their 1995 film Raja. Taking us back to the 90s, Sanjay Kapoor and Madhuri Dixit surely won our hearts. But here’s something more interesting. The audience included Padma Shri winning filmmaker Karan Johar, actress Parineeti Chopra and veteran actor Mithun Chakraborty, who is fondly known as Mithun da. His comments on Sanjay Kapoor’s dance moves made us ROFL.

Starting with Madhuri Dixit, Mithun Chakraborty said that it is hard to take the eyes off when she is dancing on a stage. But soon he added a twist to this. He says, “Lekin aj pehli bar Madhuri Dixit mujhe dikhi hi nahi [But for the first time, today Madhuri Dixit couldn’t steal my attention].” To this, Sanjay Kapoor reacts, “Arey dada, jhoot to mat bolo [Please don’t lie].”

It doesn’t end here. Mithun Chakraborty continues, “Matlab kya impression. Shatabdi ka sabse, sabse… baki ka tu samajh ja [I mean, what an impression. This was the century’s most, most… the rest I leave it to your understanding].” The comment left everyone bursting into peals of laughter.

Sanjay Kapoor wrote in the caption, “When Mithun da lied through his teeth and put me on channe ka khet hahaha and I love him for this.” To this, the actor’s wife Maheep Kapoor reacted with a laughing emoji and a red heart icon.

This wasn’t the first time that Sanjay Kapoor and Madhuri Dixit gave us a throwback to their 90’s song. Recently, the two grabbed our attention at a party. Sanjay Kapoor’s caption had a hint of nostalgia. It read, “Back to the 90s. What a night.”

Sanjay Kapoor and Madhuri Dixit’s The Fame Game was released on Netflix on February 25 this year. Manav Kaul, Rajashri Deshpande and Muskkaan Jafferi are also part of the cast for this web series.

Elden Ring: How To Find Malenia, Mohg, And Draglonlord Placidusax